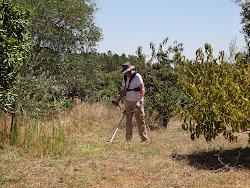 I think it was on the second day, whilst cutting away at the weeds I heard a shout over the noise if the little Honda engine beating away over my shoulder. I stopped to greet a middle aged gentleman making his was done the path from the upper terraces to where we were working. He introduced himself as Richard and was obviously English. He explained that there was a lot of chatter in the village that an English couple had brought the land, but nobody had seen them. He had seen our car with its British number plates so guessed we were there and had decided to say hello.

It was great to meet someone else, it just amazed us that we had brought a property in one of the most rural parts of Portugal, and we were finding so many English people. Richard explained that he had come over from the UK a few years previous with another guy, Luke, who lived a bit further down the lane and he was on his way to see him. Richard himself lived in the local village, Cortiçada, right next door to the café and the top of our road. We chatted for a while before he set off again and we carried on with the jobs of the day. 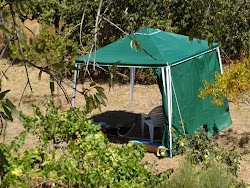 A few hours later, whilst taking a well-deserved rest under the gazebo, we heard another English voice; this time it was Luke and his Girlfriend along with a gorgeous Labrador puppy. We had heard a lot about Luke both from Richard and from Maria and Paulo when we were looking the previous year, so it was great to meet them.

So never be surprised at who will turn up on your doorstep, or in our case gazebo step.