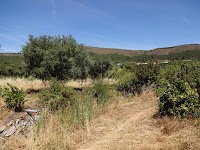 A quick survey of the property revealed that the drought of the past few months had taken its toll on the stream, it was now bone dry, along with the work we had done at Easter had all helped to keep the weeds down and they had not grown too much. The land itself had also weathered well, although it was very dry, the weeds had stayed short. We had brought the petrol brush cutter with us, so I felt this should be a reasonably easy task. 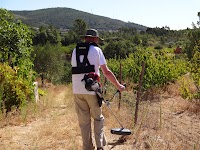 Stage 1 was to start clearing the first terrace in the lower section, so we could get the gazebo we had brought with us erected, so we had a place to get out of the heat. After fueling up the strimmer, it was time to get all the protective clothing on and fire it up for the first time.  I started simple just clearing the path outside the hut, but was soon on the lower terrace tackling the weeds.

The weather was amazing for a holiday, but maybe a bit hot for working on the land. Over the next few days we would get to the property around 9:00am and be working by 9:30am after the compulsory large mug of Columbian, Coffee that is! By midday the temperature was hitting 36 + so it became impossible to work. Thank god for the factor 50 sun cream else I think I would have ended up like a bit of deep fried beetroot.

We also both made good use of the large brimmed hats we had brought in Peru a year or so earlier, these were perfect to keep the sun off of our necks. 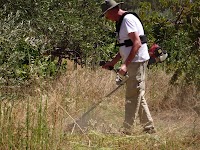 It took about 4 days to clear all the lower terraces, it seems strange but I found it very satisfying and relaxing, just waving my brush cutter to and fro for hours on end. For a few hours each day all I had to worry about was cutting the next weed, and how long before I would have to refuel my machine. All the work problems and challenges were completely brushed aside. It was amazing that at the end of each day, we were both tired but felt good, hard work was better than any gym work.

I was even able to use the brush cutter in the dried up stream, which made it a lot easier than at Easter when it was a hand-cutting job, up to the ankles in water. Teresa was working as hard as me, pruning back the overgrown vines. 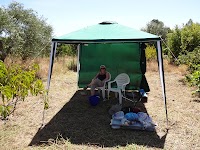 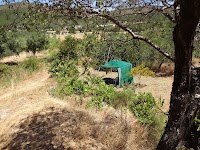 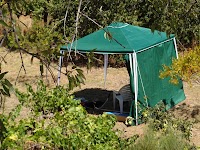 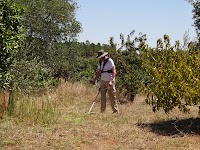 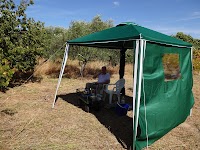 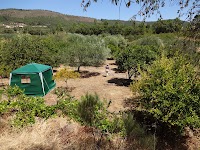