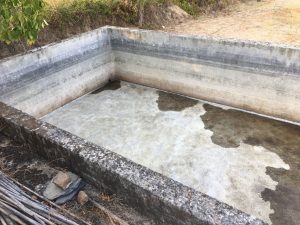 On one area of our land we had an old concrete water tank, which every year filled with rain water and was full of frogs and the detritus that comes with them. It was obviously used to push water up to, so it could be used to run down over the land to water any planting. In the summer the water would evaporate and leave a slushy mess in the bottom of the concrete tank.

This summer was very dry and hot and all the water evaporated, the tank had dried out completely. This left a hard, crusty layer in the bottom of the tank. This was a suitable opportunity to sweep it up and clean it out. This led to me investigating a bit further to see how it had been used. 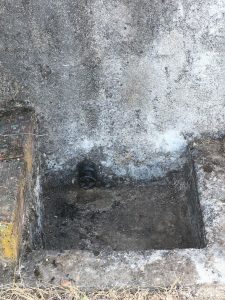 I found a couple of holes in the sides of the tank which must do something. Digging down on the outside I found a bricked drain type area, in each drain was an old cast valve type thing on the outside of the tank. I gave them a good squirt of WD40 and much to my amazement they still worked.

This gave me further encouragement to work out how it was all used. One valve just seemed to let the water flow across the top terrace of land, but the other seemed to have a further pipe at the bottom of the drain. 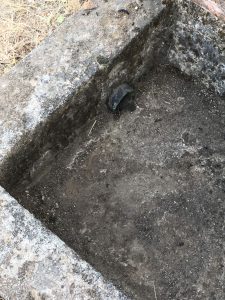 This I found ran under the track and poked out in a wall on the other side of the track. There underneath there was a further drain arrangement, with two pipes which released the water across the lower terrace of land. So, using the valve on the concrete tank, it was possible to release the water from the tank and it would work its way under the dirt track and water the land, clever. 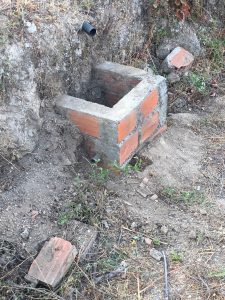 I cleaned everything out to see if it still operated and tested it using a hose from the house and much to my amazement it worked. Now we just need to work out how they pumped the water up to the tank. We have two wells on that part of the land and I have found a few bits of pipe in various places, so I suspect they had a pump somewhere to pump the water from a well into the tank. 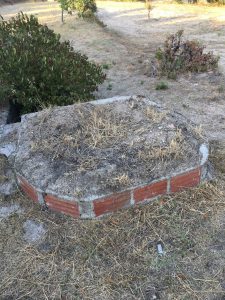 There was just one other area around the tank which needed investigation. There is a hexagonalish construction which has been filled in with dirt. We don’t have a clue what it was used for. It seems to have a brick rim, put on top of an old concrete construction. Thoughts are a platform for a pump, a filled in well, a olive wash, a tank for grape pressing.

Further investigation is called for. I have been gradually cleaning it out, the first thing seems there is an amount of waste concrete dumped in one side. I think this might have been the left over from when they put a new layer on the floor in the garage. Digging down it looks like there may have been a flat cement surface just at the bottom of the brick layer, the top of the concrete part. This is just around the edge, the middle had still more soil, digging further it seemed quite soft, the material dug out looked like old rotting tree waste. 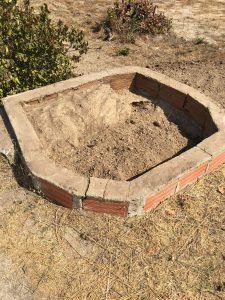 Progress was slow as it was very hot and the ground very hard, so I have left it for now until the rains come and it softens the material inside and I will dig a bit further.

Come back in future and I will blog again as we uncover what it might be and what we decide to do with the area.

This entry was posted in 2018, General, Project Portugal, The Farm. Bookmark the permalink.