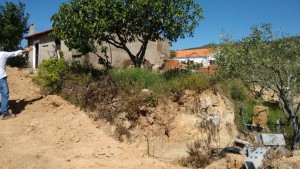 Two things that really came to light during our visit this Easter was firstly that the old hut that we have been using for the past few years to store our things in was a bit of an eye sore and its was most definitely in the way of the view to Monsanto so it is going to have to go.

Secondly, the piece of land next to us was very much in our view from out of our bedroom window and whilst we felt sure that it was designated as “Rural” so it meant that it can’t be built on, with its size being 5000sqm (just over an acre) it was possible that it could happen. So as it was for sale the obvious thing to do was buy it!

We had seen the plot listed on the Remax site so know how much they were asking. In our opinion that was too much plus we know that it had been on the market at least since we had been there nearly 5 years and probably a lot longer.

We made tentative enquiries with Remax on the basis that we might be prepared to make an offer! Not actually saying that it was dependant on the price, but obviously the tone I made the enquiry was enough that they pre-empted a discussion with the current owners and were able to offer it at a price we felt acceptable. We are sure a local would pay a lot less, but it was worth it to us to protect our vista. 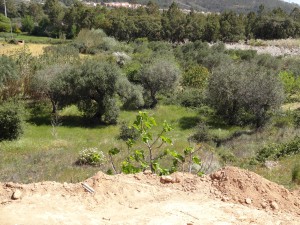 Well things have progressed well since our return to the UK and the “Promissory Contract” is in place and the deposit has been paid, which means to all intense and purposes that it’s a done deal it would cost the sellers too much to back out now.

We had a clause put in to say that the final exchange / completion that is done at the Notary must happen on one of three days in June when we next visit, so as not to incur additional costs. Worth remembering you can do things like this a lesson we learnt from our original purchase.

So hopefully all being well when we write about our June visit we should be able to let you know if everything went ok!

1 Response to View and Vista