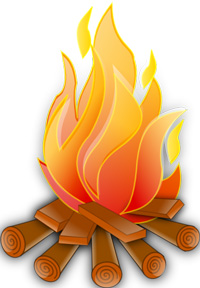 Whilst I was strimming away down in the valley, Teresa was slowly working her way across the 2nd terrace removing by hand the old vines; it was certainly giving her plenty of exercise. Each vine she had to cut back to the main stump, then dig around the root as deep as possible, at least until you get to the bottom of the main stump, then saw through as many of the roots as possible before rocking the stump back and forth until it snaps. The last bit was just to fill the remaining hole with dirt and next to the next one. It was so funny watching from the valley up to the terrace to see Teresa sitting down rocking to and fro; I really thought she had lost the plot!

Along with the ever growing pile of old vines that Teresa was creating we also have about 4 large mountains of old vine cuttings from the previous year lying around the plot. Until now we have had no way to get rid of them as we don’t have any electricity to plug in the wood shredder and there are very strict restrictions on having bonfires. However at this time of year Bonfires are allowed, I think the law allows them up to the start of May. Be very conscious of these laws they do carry heavy fines if you are caught breaching them. Hopefully by the time you have finished reading this posting you will realise why. It was certainly an eye opener to us. 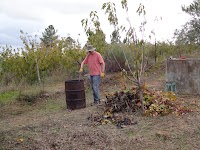 To break up the monotony of digging out the vines Teresa decided that a bonfire was in order. Not being sure of how this would work we found an old 50-gallon oil drum around the back of the hut, which had the end, cut off. Perfect we can burn the rubbish in here. It took ages to get it going, it just keep going out, but eventually probable after about an hour and 10 attempts we got it going. Once alight I left Teresa to work her way through the pile of vines cuttings and roots.

Later in the day I returned to find the pile reduced by half, significant flames leaping from the oil drum and Teresa with a big smile on her face. She then explained that she had found the knack and was now a fully registered pyromaniac. The knack she had found was to use the fresh Olive Tree cuttings between the vines debris. When you think of it the logic is there Olive Cuttings, Olive Oil. It was certainly a technique we used over a few days to burn at least 3 of the plies we had created over the previous months.

The important point for you to note is that is why the Portuguese have these laws on bonfires. We have around 70 Olives trees spread across our plot, just imagine if a fire got hold of that and then think of the bigger picture, this is a major Olive growing area, just think of the devastation that could happen, it just doesn’t bear thinking about does it. So be careful and abide by the law it’s in everybody’s interest.