As mentioned in previous blogs we had always planned to visit during the last week of October. The timings of our visits this year has seemed to tie in quite nicely with the building progress, or maybe it just that the builders time things to match. Either way it has worked well and this trip was no exception.

This blog is just to give a little more about what we did on the trip, I am sure it will be focused around the build but then again that’s what this blog site is all about and we are just a little bit obsessed with it, not surprising really eh.

We flew out on the Thursday evening, arriving at the rented apartment about 11:00pm, we made excellent time, but with working in the morning and then travelling with all the stress around airports, by the time we arrived we were very tied, so a quick drink (none alcoholic) and unpack the bags it was off to bed.

On the Friday we were up at a reasonable time, both excited and apprehensive. We had seen the photos Paulo had sent us so we knew that work was progressing, but so many times when we turned up on the site we were disappointed to find no builders. So whilst we were very hopeful, we were very unsure.

We have to drive down a dirt road to get to our site, there are a couple of ways in, but we choose the road from the Orca road. As we made our way the conversation was builders or no builders. As we made our way down the road the first thing we encountered was a builders truck with a flat tyre and in true Portuguese style there were a couple of men doing what they needed to do to change the wheel, not bearing too much about Health and Safety. Our comment was I bet that’s our builder! A few yards further on, well, remember this is an out of the way dirt track and on a normal day you are lucky if you see another car all day, it was like the M25 in the UK, there were trucks, diggers and cars all over the place.

About half way to our site about a year ago the council built a large soak away to take the rain, when it comes from the local village, it had been constructed not impacting the area too much, but now there were loads of pallets of bricks / blocks, a Bobcat loading the pallets onto a smaller truck and cars moving about. Thinking the worst, I guess, my comment was “Crikey what the &^%@ are they building here now, I thought we have picked an out of the way site”.

As we passed the spot we noted that the Bobcat loaded with a single pallet of bricks, was following the truck with its 3 pallets further down the track. The Bobcat pulled to the side to let us pass, which we did and as we drove over the next brow, it suddenly dawned on us that maybe these might be for us. We followed the truck as it turned up towards and eventually on to our plot, with the Bobcat just behind us. It was amazing the place was swarming with trucks and people. I think we may have just had a little bit of a smile on our faces by this point.

It took us a while to try and find a place we could park our car out of harms way and as we did we saw that Marco was organising the guys on the site. We made our way over and said hello, probably with the biggest smiles that he had ever seen from us.

Most of the w

eek was spent searching around various builders’ merchants and discussions around the build, but I did have one little job to do. The bad weather in the previous couple of weeks had washed away part of the little bridge across the stream, so I had to make a repair, using a bag of cement, rocks that had been washed down the stream and gravel and water from the stream I was able to make a fairly substantial repair. 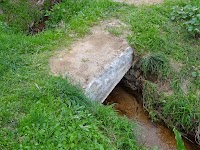 It needs the grass and weeds to grow back over, but even so if I say so myself, not a bad job.

We also spent some time rewiring 5 more rows of the vines, removing the old wooden posts and replacing with new ones and running new lengths of supporting wires along. As the vines were finished we also pruned them back ready for next year, probably a bit early really but as we won’t be back now for a while it needed to be done. 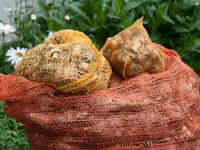 We also planted around 100 daffodil bulbs, we had brought them down with us in the summer when we drove, but of course they couldn’t be planted until now. It didn’t take too long, but it was backbreaking.

Hopefully we should get a show next year, as long as we don’t miss them. If we do we will take some photos and post them.

It was a short trip, but very fulfilling, both from the build and the little jobs we did. We also were both ill a couple of days, fortunately on different days and only just for a little over 24 hours. Think it must have been a germ but we were both pretty rough, however it didn’t spoil our trip.

Well that’s it for now, we are getting updates from Paulo the Project Manager and it seems we are still making good progress, the roof is almost there and they have started putting up all the interior walls. Lets hope the weather allows them to keep up progress, although we hear it been a bit wet this last week.

Check back soon, certainly at the start of next month (December) for then next build update.