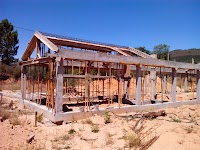 Well July was a month of very mixed emotions. At the start of the month things seemed to be progressing reasonably well, you will see from the photo that the builders started to put the reinforcing steels on the roof, but after a few days everything just stopped.

The next two or three weeks were very uncomfortable and stressful; we had expected that we may have some stressful moments during the build, but when they come it still doesn’t make it any easier. (I’m sure there will be more to come as well!)

Basically everything stopped, no builders on site, no progress and what was worrying, no Marco! Paulo and Pedro, the architects and Project Management team seemed unable to locate him, they tried visiting the other sites they knew about, phoning, visiting his local haunts and emailing, but nothing. Now this is not uncommon with builders anywhere in the world and Paulo said they see this a lot in Portugal, but didn’t expect it from Marco. You can imagine all the things that were running through our minds, especially as we are on a limited budget for the build. Has he done a bunk with our money, we felt sure that was not the case but you can’t help what goes through your mind, we are all human, aren’t we?

As you may have read in last month’s blog, we knew that work was running behind on the work at the Orca Swimming Pool. What came to light was Marco was also doing some work for Pedro, one of our Architects and was late in starting that work as well. This of course worked to our benefit in one way that he also had a vested interest in tracking Marco down.

You can imagine that we were starting to get a little concerned. It wasn’t so much that the work had stopped; it was more the fact that nobody seemed to be able to contact Marco. We just had no idea what had happened. Was he ill? Was he on holiday? Was he in trouble? etc. It was bad enough for Paulo and Pedro and they speak Portuguese and are local, but for us being remote it was very worrying.

Eventually, thank goodness Pedro made contact with Marco, phew! And the story of what was been going on became clearer. It seems that Marco has a number of projects on. I won’t detail everything here as it’s his business not mine. This was however, stretching his resource, so he had brought in a sub-contract team for one of the jobs. They had badly let him down and they had made a lot of mistakes. Eventually he had been forced to sack them from that project. He therefore felt obliged to take his already over stretched team to that project to correct the mistakes and get the project back on track.

This of course had adversely affected progress on our build, we believe Marco felt justified as there is still a fair amount of time left on our project and therefore he has enough time to catch things up. This is ok, we know there will be problems with projects, but tell us. Keep us informed and if you are not going to be on site for a week or so, let us know and we are less likely to worry and therefore give you grief. We asked Paulo/Pedro to pass this comment on to Marco, don’t know that it will make any difference but at least we can make our point of view known.

We have detailed a fair bit in this blog, hopefully explaining the actions of the month, so that if you are doing a similar project, you can see the sort of things you might come up against. Hopefully it will give some reassurance.

Marco has pledged to be back onto our project the first week in August, let’s hope that’s the case. Again, we passed the message to him via the Project team, which if this is not going to happen for any reason, we need to know, don’t leave us hanging. In fact I think I will be emailing the Project team to make sure they get an update from Marco.

So by the end of the month we seemed to ok again, maybe no real progress on the build but at least everything seems to be stable again, we think, well until the next time eh!

July was a bit like the Monty Python sketch, Anne Elk and her theory, which is her own and nobody else’s. The Brontosaurus is thin at one end, thick in the middle and thin at the other. Apologies to those not into the Python, but I am sure you get the analogy.

So we hope next week we should see some activity on our project, let’s hope so, but I don’t think I will hold my breath. Watch this space. Fingers Crossed. Time for another trip I feel.