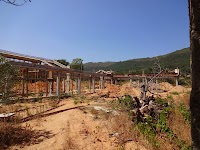 As for most of mainland Europe, August is the main holiday month for the Portuguese, either they go away or family that work away, in places like France return to their families in Portugal, builders included. So it was no surprise that the builders did not return to our build the first week of the month, in reality this was never going to happen and we knew that.

The one real positive was that Marco was very much back in communication with the Project Manager so we were able to get updates. It also turned out that the steel beam we require for the main span of the roof was for strength reasons being made from a strengthen steel which is not generally available in Portugal and was having to be shipped in from Spain.

Due to the fact that Marco had not ordered early enough and we were in the August holiday season the steel was not going to be available to the roof fabricator until the end of the 2nd week in September, it will then take a further 2 weeks for the fabrication and to get it delivered to our site. So in reality we aren’t expecting this until the start of October. We knew this was factual as we had sight of a copy of an email from the roof fabricator to Marco.

The Project Managers raised the point with Marco that why can’t he get on with the floor, which on one side was valid, but when you look at the construction as it is at the moment, the shuttering for the rest of the roof is in place and supported by numerous steel props which are resting on the floor. There is no way in reality that they would remove this to get on with the floor and reset it once the floor had been laid and settled. We just have to resolve ourselves that we have to wait for the steel roof frame to appear.

Also on the favourable side, it was obvious that Marcos team have cleared the backlog we mentioned in previous blogs as Pedro (one of the Architects) now had 4 men on his site pushing on. Whilst this doesn’t move our site forward, we understand the priority logic as we needed to be patient and wait for the steel and Pedro’s build was a commercial venture that was sponsored by the European Commission and it must be completed by December 2014, else he will lose the funding. So it’s all makes sense! and we are still being reassured that because we have a long lead time on our build it will still be completed on schedule. Let’s hope so. When you look at the other construction projects you can see that it should still be achievable, so we are reasonably comfortable with what we are being told.

Whilst we are ever hopeful for some advancement next month, it is we guess going to be limited to when the steel structure for the roof arrives, so our expectations, whilst ever hopeful are somewhat limited. We will of course blog and let you know.

With all this it was a good enough reason, not that we hadn’t already planned it, to make another visit. So the last two weeks of the month were spent in Portugal, firstly to meet with Marco (Builder) and with Pedro and Paulo (Architects & Project Managers), then also to get some socialising in, we had been planning through the course of the year to be in Portugal at the same time as our friends Jules and Andy, get in some relaxation and of course to do my favourite thing in the whole wide world, Strimming!

No pictures of the construction this month as there is nothing to show but another Blog coming next on the last two weeks of the month and news about our visit.