We had always planned to make a visit in August; the exact timing was down to ensuring that we coincided with our very good friends Jules and Andy’s trip so we could meet up for a few beers and a Barbeque or two. So the last two weeks of the month it was, that way we had at least a week over lap with Jules and Andy, could include the UK Bank Holiday, so I only needed to take 9 days leave from work and it still falls with the school holiday period for Teresa.

Not much to say about the journey down it was all pretty much as normal; we went back to the old timings etc and using the Newhaven Dieppe route. The journey back was a little more stressful as we got the timing for Bordeaux wrong. Arriving on the Bordeaux main ring road at rush hour on the busiest day of the year was not one of our better decisions. It took around 3 hours to do 19Kms, won’t do that again, worse than the Paris ring road or the M25 around London.

Now a little secret, not sure I should tell you this one, but it might not matter as it probably only applies to the Dieppe / Newhaven route and that, much to our dismay may not be running next year, 2015. All very political, French verses the English authorities (nothing new there then!) but if you arrive at Dieppe early, do not join the front of the queue for the ferry as if you are in the first 50 cars or so, you will be put on the highest deck, where when it comes to unloading everybody else is unloaded first plus the Newhaven immigration control is not the fastest service in the world. Needless to say we were 3rd in the queue to get on and therefore were 3rd to last to get off, which meant whilst we docked at 10:00pm it was 11:30pm before we got through the control and home and we only live 5 minutes from the port. So again something else we won’t be doing again, but as I say it might not matter as the future of the route is very unsure at the moment.

Knowing it was going to be hot in August we brought an 8 foot paddling pool to take with us. Having a borehole and pump installed along with the electric we could fill it quickly ready for use, or so we thought! We arrived on the Monday around midday to find that the electricity had been disconnected! Oh rubbish, (that’s the polite version) . We had planned to plug the fridge in ready for stocking with drinks, and once cleared/strimmed, the second terrace, install and fill the pool. So that couldn’t happen, the family motto had to kick in “Never mind eh!” we will get it sorted.

Paulo (Project Manager) was on holiday himself the first week of our visit, so I emailed the office and followed up with a telephone call to his partner Pedro on the Tuesday. Not totally sure what happened, it was either cut off due to none payment or Marco had it cut-off as they were not on site. In any case we needed to get it reconnected and attached to our Portuguese bank account. Both Marco and Pedro helped us immensely through this process and we were able to get the connection back on by the Friday Morning, more details in the Electrical Connection blog coming later. Yay! out with the paddling pool and drink in fridge. Bliss!

We did manage to get in two site visits, one in the first week with Pedro and Marco and another with Paulo in the second week. It was a relief to see and talk to Marco face to face after the difficulties of the past few weeks and very reassuring. We did of course have a little moan about the lack of progress but under pinned our earlier comments that we are reasonable people and that he must communicate when there is an issue, not just hide away. I think he got it! Only time will tell I guess.

We spent a lot of time on our farm (quinta) building site, Teresa relaxing under the gazebo with a good book on her Kindle and me strimming away, clearing the undergrowth. The weather was amazing each morning we woke to clear blue skies so made early starts to benefit from the cooler early mornings. By noon the temperatures were reaching the mid to high 30’s and touching on 40 degrees, in fact one day, the Bank Holiday in the UK when they had more rain than a normal month we hit an all time high of 43 degrees, so too hot to work, time for a quick dip in the paddling pool and then a afternoon kip under the gazebo! Perfect, just Perfect.

For this blog I have included a short video of the cleared / strimmed quinta (farm) so a little walk around the estate, well the farm area anyway. You can see for yourself what a pretty place it is when it is tidied up. Sorry for the shaky picture but it is hard filming and walking at the same time. You can turn the volume up if you wish but there is little noise, just the crunching of my footsteps, which also shows just how peaceful it is. Enjoy!

It wasn’t all work and no play, whilst we did spend a lot of time at the quinta, we did manage to have a day out and had some great socialising with friends. On the Tuesday of the second week we headed off South for a day out, it is a direction we hadn’t explored really yet, so had a quick look at the map and spotted a reservoir about 2 hours or so south near a place call Avis, so off we went. The country side was as we expected quite flat and uninspiring on the way until we got close to Avis and then it became a lot more interesting. We found a lovely spot right by the edge of the reservoir, see photos, for a brew up and relax. We headed back through a National Park near Portalegre and the Spanish Boarder, which was beautiful, getting back around 6pm, a great day. 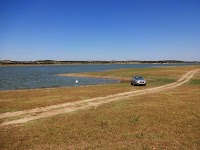 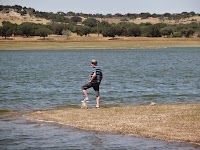 We also had a number of great Social events, if that’s the right term. We had a couple of coffee/tea and cakes sessions with Jules and Andy, plus a couple of evening meals, one which we hosted in the courtyard of our rented apartment and included our hosts, plus some of their friends that were travelling from Morocco. That was on the Sunday and turned into a real occasion with the mix of English and French, but only John being able to speak both languages, interesting, especially as you remember we are in Portugal! We certainly did some damage to the Sagres beer stock I can tell you, but no hangovers in the morning which was great. Its great to have such good friends!

All in all, it was a busy trip, but we certainly got in our fair share of relaxation. We just really need the house now, so we can really get into the social scene and relax more, everything will be so much easier not having to spend 20 minutes each end of the day travelling back and forth.