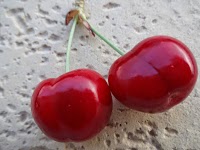 One of the main reasons to make the trip this time was we hoped it would tie up with the Cherry Festival. We had been told many times in previous visits that it was the first full week of June. We were lucky we picked exactly the right weekend, the main festa (festival) ran from 7th to the 10th June, not only that we were not more than 20 minutes away from the main festival village, Result!

June is the main month for the cherries, we were worried that because of the bad weather this year everything would be very late and maybe we would miss it. We needn’t have worried.

We did a couple of hours on the plot in the morning. Teresa started clearing part of the stream; I think the rather large weeds were annoying her. She cleared a good 50 feet, it was hard backbreaking work and I think her arms ached just a little when we stopped. You can see the rewards of her efforts in the photos here. 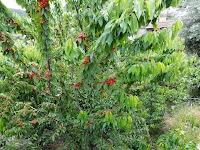 We packed up around 1:00pm, cleaned ourselves up a bit with baby wipes and a good spray of deodorant and jumped in the car and headed off for Alongosta. It was amazing as we turned off on the road up to village; there were cherry trees everywhere and so many cherries on each branch. We had driven around the area a fair amount but hadn’t realised this area was so prolific for cherries. 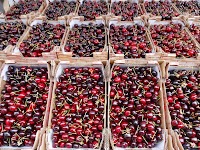 We had to park a good few metres away form the centre of the village as there were a lot of cars and the centre was shut off to traffic. The festival was amazing, you could get Cereja / Cherries by the crate. You could get them in as many different ways as you can imagine, Dried, Pastel de nata, cherry style, Cakes, well every different type of cake you can think of, but with cherries added. 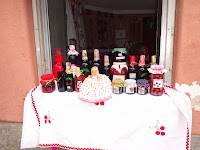 There was cherry wines, cherry sangria, cherry liqueur, cherry fondue as well as all the bits that go with them, like baskets, jewellery and of course T-shirts.

There was no choice of course we had to buy a crate of cherries, not sure how much there was in a crate but at €5 they were very cheap, all I know is I think the crate was one of those magic bottomless crates, it seemed to keep refilling itself. I do have to say they were amazing they were so flavoursome. 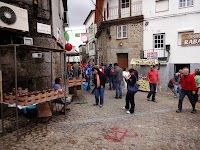 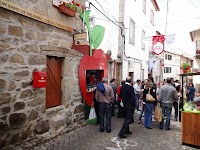 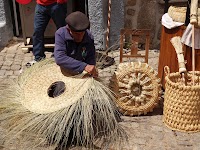 It was fascinating walking around; it is a very pretty village with many narrow streets all seemed to have some kind of stall or eating establishment selling something related to the cherry. Many locals had just opened their windows that faced the street and were selling their wares. 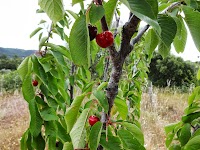 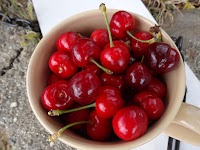 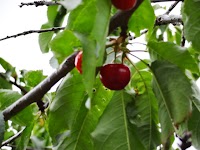 We do have a few cherry trees on our plot, but a couple of them are very young and I think they really need a lot of watering in the run up to June to get a good crop, which we are unable to do, but maybe one day. There are also 4 very old trees, which we are unfortunately going to have to lose when the house if built, these had a few but not many.

Pedro, the architect had advised us not to worry about loosing these trees as they wont crop well and if we plant new they will only take a couple for years to produce a good crop.