We were up early the next morning. Saturday 1st April. Down for breakfast as early as we could. I think we must have been first down, or was this hotel as busy as the one I had used in January, hum! No more people appeared, the food was usual stuff for a hotel breakfast and the waitress was very good.

Excited, who us? You bet, Teresa was almost bouncing up and down, I have never seen her eat so fast, the sun was shining, “Come on you ready” she enquired, “Ok lets go” I said as I threw the last mouthfuls of coffee down my throat. Whooossh ! We were out of the breakfast room, through our room, picking up anything we thought we needed and in the car.

We took the local roads over the mountain, well the Portuguese called then mountains; they are more like big hills really. It was very pretty; the views on both sides were lovely. We tried to work out where we were as we went but it was difficult, but it wasn’t difficult to find our way and 20 minutes later we where turning into the little lane in the local village to get to the property. 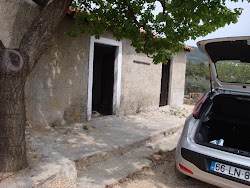 I had remembered that as we passed the house at the entrance there was a water gulley with a grid, which was very loose and parts missing so we had to be very careful when driving over it.  We made it and soon turned on to the drive of “our land”

Leaping out of the car we both set off to survey our land, we set off across the top terrace; this is where we intended to build our house. We weaved our way between the vines, inspecting the old cherry trees and the many fig and olive trees. It wasn’t long before I was making my way to the very badly dug out steps in the bank to get down to the next terrace. 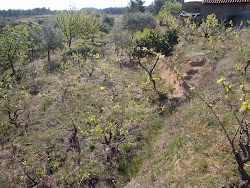 st Mistake – Don’t be too hasty!  I lost my footing, slipping on to my bum, with a tremendous bang and slide down the rest of the bank. I was in agony! Teresa didn’t know whether to laugh or cry, but soon realised that laughter was not the right thing. I couldn’t move for a while, what the hell have I done? We had only been here less than half an hour and is this the end of anything for this trip

It must have taken about 5 more minutes before I could get up, but get up I did, my back was killing me, blood was pouring from my arm. What a start. 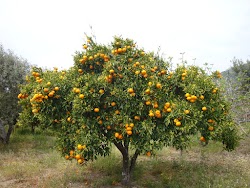 We spent the next hour or so, just walking around, sampling the fruit, there is so much if it. The oranges were so juicy.

The ground itself was like a meadow, some several inches deep in flowering weeds, which actually looked very pretty. Really it needed de-weeding, but how can you de-weed nearly 2 acres with no tools? Not going to happen was it. 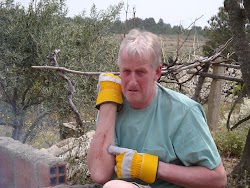 My back was killing me, as was my arm, the bleeding had stopped but it was very sore, but I am not going to be beaten, pain killers to the rescue, well I hope. Lets try for a cup of tea for now, we have some water, how to heat it. We found a couple of old pots that the previous owner had left laying about, we had bottled water, we had loads of wood and matches, lets try a small bonfire and heat the water. 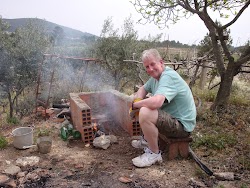 To be honest we were not sure if we could have any sort of fire, there are some very stringent laws in Portugal about having fires, but we were sure a small well controlled fire would it fine. It was we managed to boil the water, but in the process loads of bits of ash and twig made its way into the pot. The tea was made but not drinkable.

Oh! Well time to try and do some work.

1 Response to Up Early