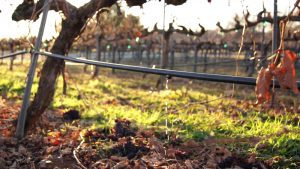 We needed to get to a base point before we can start to develop the farm in a way that we can maintain and use it in a way that suites our way of living. We think we are nearly at that point.

We have had the irrigation system installed and it seems to be working well, we have attached the feeding tubes to vine runs, although the vines are old and there are many gaps in the runs, we can sort that next year with some new vines, there has been no point until now as we are not there enough to be able to take care of any new plantings, at least now they will get watered, hopefully that will be ok. We still need to settle the feeds to the fruit trees but we are getting there. The olive trees are really well established and extremely hardy so they are fine.

We have agreed what needs to be done with the contractor and also agreed the price, we are now just waiting for him to come with his team. He did say September, but we are well through September now, so I guess it’s a typical Portuguese September!!

The plan for our next trip is to get the watering system settled a bit more, prune the vines for the year and re-post some of the runs. We did about 10 of them last year, but one needs some attention and see if we can re-post and wire the runs up on the top terrace. That way hopefully they should all be prepared for replanting in the spring.

This entry was posted in 2016, Project Portugal, The Farm. Bookmark the permalink.