Long weekend or a short week?

Was it a long week end or a short week, there is the question?

Either way it doesn’t matter we just had one.

There was no way we could wait until August time to get back to Portugal to see for ourselves what was happening, so we decided that we needed to have a site meeting with the Architect/Project Manager and the builder to check on progress of the build against the schedule. Plus we hadn’t paid the builder any more money since the initial deposit and we were sure it must be due, although they hadn’t been asking for any. Anyway it is cherry harvest time!

The builder had also organised and paid for the borehole and the connection of the electric by various third parties and had paid for them himself, so we needed to reimburse him for this.

So Wednesday evening off to the airport, making the most of our air miles we had managed to get a couple of return flights for £35 each, just meant it was Heathrow rather than Gatwick but hey ho! We had organised to be in Portugal from the Thursday to the next Tuesday so I guess that’s a long weekend really.

We spent the rest of the morning at the builder’s merchants looking at toilets, showers and tiles. Which was interesting for the first hour, but after 3 hours we were losing the will to live. It also proved to be somewhat a waste of time, as when we met up again on the Monday and spent another half day looking at the brochures and then when we compared to the quote from Marco the things we had been looking at were double or treble the quote price.

So we then looked at the actual items that had been quoted and you know they were perfectly adequate. What would we rather do spend another €1000 on different shaped toilets or a swimming pool? No contest. Why didn’t we do this in the first place? So lesson learnt if you get to this stage maybe look at what’s been quoted for first before you go to the merchant and then make sure you look at the pricing and compare, else a lot of time can be wasted.

The other question was, why are we looking at these so early, the answer made sense, we had insisted that we had suspended sanitary ware and a decision was needed, as each type had a different frame that had to be built into the walls when they are constructed which would be soon, apparently.

Not a lot of construction happened once again in the few days we were there. We made a joke of this with the builder as once again when we were there, the workmen weren’t. It was just bad timing, apparently the next stage was to start creating the roof and the metal work was all being prepared off site. 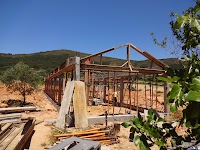 On the Tuesday the workmen did reappear and indeed started to shutter up for the roofing, see photo.

we could only see the start of this but as we had to leave for the airport and back to the UK.

Oh! well roll on the next trip!

Lessons from this trip.

1. Check what actual equipment is in the quote.

2. If you visit the merchant, make sure you look at the prices as well.

3. Make sure you spray your legs with insect repellent, 100% Deet is preferable. Those bites really hurt.