Let’s see for ourselves

The journey down was pretty uneventful, thank goodness, only to say that we started to try and share the driving a little more, but being a bit of a control freak it is very difficult to let someone else, even if it is the beloved other half to take control of the wheel. 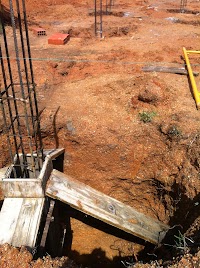 We arrived at our site on the Monday around midday, to carry out first inspections. Any builders? Nope none of them about, but then I guess it is lunchtime and we know they do tend to have long lunches. After a quick review we could see that some shuttering on the foundation pillars have been done, so some progress I guess. It was weird to see an area that when we were last here that was covered in trees, old vines and weeds was now naked of vegetation and a building site.

We were tired after our long journey and it was after all Teresa’s birthday as well, so we decided that we would just collect the bits from our hut that we needed and make our way over to the apartment, especially as since our last visit Marc and Meike had sold Quita Ponta Nova to John and Fanny who we thought were French, but it turned out that Fanny was French but John was in fact English, although he had been living in France for many years and we hadn’t met them yet. 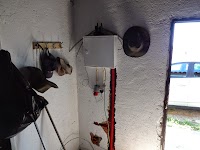 Opening up the hut, we were pleasantly surprised that we had an electrical connection, good news the power had been installed and was obviously now certified and turned on. Whist this was probably necessary for the building it was also going to be very useful for us. The installation is temporary as you can see, eventually this will be pulled back to the house, but it does at least mean we can get some power. We could also see the meter housing at the edge of the site was a bit rough, (Later discussions with the builder revealed that this was due to the wet weather when they were installing and they would tidy this all up later in the project).

We left the site around 3:00pm and drove over to Quinta Ponta Nova and met with John and Fanny. Well we need not have worried; they were lovely people and had only moved in just 10 days before we arrived. We think they had spent most of the 10 days getting the apartment in order ready for our arrival rather than getting their own accommodation sorted. They had done a great job, so we unpacked, opened a bottle of champagne that Teresa’s mum had given her for her birthday and settled down for the evening.

2 Responses to Let’s see for ourselves