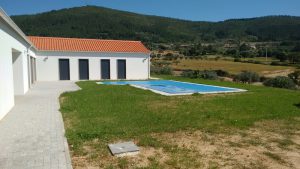 June has been a far better month, I know we were late posting May’s blog, but that was more because we had some issues as I am sure you have read and we wanted to at least get some of the corrections done before posting, daft I know but we like to stay on the positive. 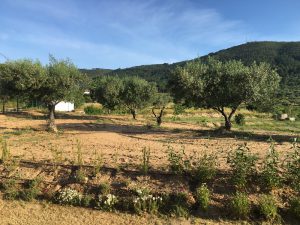 We still have some corrective work to get finished off but at least the better weather has returned. 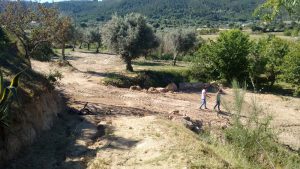 At a visit during the month we were able to review and confirm progress on the work. 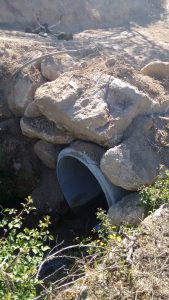 The new larger pipes have been installed for the stream, or should I say to allow for the crossing of the stream and the start of a new rock wall along the side of the stream where it had overflowed was in progress. The rather large Grand Canyon style crater that was created has been filled and the bank to the neighbour’s land has been strengthen with rocks. So everything was starting to look as normal as it could, we just need the vegetation to grow back now so it doesn’t look so “manufactured”.

The irrigation system to the farm area has been installed and is almost complete, just a bit of tidying up to be done. The only issue we had was that because we are using the same borehole for the watering as we are for the house, when this is running it takes all the water away from the house, which is not so good. After a few discussions and thoughts, the decision for now is to run the new irrigation at night, when we don’t need water in the house. With some scheduling of the watering around the house should avoid any usage problems, that with the addition of a non-return value on the house pipe should fix it for now.

After several attempts, reading the manuals and a fair amount of testing, we got the result we needed. The manuals were fortunately in English, but it still takes a bit of thinking about to understand what it was actually saying, but we got there in the end.

The schedule for now is:

It was also time for the great unveiling of the pool. Whoohoo! You have to bear in mind we had it installed at the end of last October and it has been covered up since then, whilst we have been to the house, it has either been to cold, e.g. the winter or our visits have been too short. We had to get it done at that time due to the availability of the construction company. It was a bit mucky so a good clean of the sides was needed, but the floor was still very sandy.

We didn’t want to clean the sand out until the guy who constructed the pool returned to give us instructions on cleaning the filters, we were sure we would clog them up with the amount of sand that there was.  However, it was just sand in the water. After it had settled, post the cleaning of the sides, the water was clear, so the first dips/swims were certainly in order. Splash! 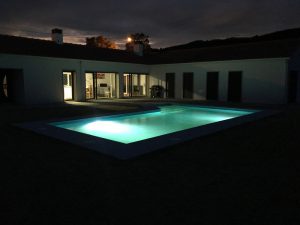 We also turned the lighting in the pool on late one evening and the affect with the darkening skies was just knockout.

The last job on this visit was to get the outside lights all put up and working.

This we managed to do just about but didn’t have time to take any photos so they will follow soon. It is going to be quite impressive I think.