After the long winter it was at last Easter and time to head off to Portugal again, hurrah! We had decided to try a different route this time. Although we had always to date gone Newhaven to Dieppe on the ferry, this was a four-hour crossing and would the sea be rough at this time of year? Anyway it’s good to try something different. We had decided to try the channel tunnel, it was a couple of hours from home to the tunnel entrance but the crossing was slightly cheaper which compensated for the extra time, also the crossing is just 35 minutes against the 4 hours on the ferry, but remember we are only five minutes from the port of Newhaven.

We had also thought about in the French side as well, the route from Calais to Portugal was still fairly direct although it seemed to head more towards Paris than from Dieppe. I had roughly calculated that we could make Bordeaux by about five of six in the afternoon if we got the six o’clock in the morning crossing. If we had a good run we might even make Bayonne on the French Spanish boarder again.

Again as in the summer and as we weren’t sure how far we would get, we took the risk of not booking a hotel for the stopover on the way down. Remembering too that in autumn of 2010 we took the risk and t was fine also in the summer of 2012 although difficult we did the same and still managed a room even if it was bit more expensive.

We left home at about 3:00 am just as we was leaving our son and his girlfriend were just coming in from a night out. How the different generations live eh! The drive to Folkestone was trouble free, but just as well that we left enough time as there were several spots where there was speed controls. We arrived with enough time to get an early morning coffee, yep we are on the coffee again.

The SatNav told us we had about 22 hours to go and started routing us towards Paris, this it did say was the fastest of the three routes that it had calculated, so who was we to argue. Well maybe we should have told it to avoid Paris, yep on to the Périphérique we went. Nose to tail with traffic, cars coming from all directions, this wasn’t supposed to happen. It took a good hour to get round Paris. Well we won’t be coming this way again. Please take note of this comment, if you are travelling south from the English coast to the south of Europe, DO NOT GO VIA PARIS.

We stopped for the usual copious brews of Colombians best, coffee that is; by about 6:00 pm we hit Bordeaux. Our timing even with the nightmare of Paris was on point. Could we make Bayonne? Um! Well it’s about hour, that wouldn’t be too bad would it, that would be about 7:30pm, ok let’s go for it! Big mistake! We must have hit the biggest traffic jam in living history and the rain, well rain it was like someone pouring buckets of water over the windscreen. We were tired too, so with the rain, the traffic as well we were getting very tetchy.

It was 9:00pm by the time we got to Bayonne, we were starving , tired and a little irritable, so we headed for the McDonald’s; at least we knew where that was from previous trips. After a very quick burger the next job was to find a room. Well much to our amazement that wasn’t as straightforward as we thought, it took three motels before we found a room at the premier class motel.

We got up at about 3:00am and headed off; the rest of the journey went well, filling up with fuel both diesel for the car and coffee for Teresa and me. We crossed the Portuguese border just before Midday. The sun was out and the sky was blue, what a very welcoming site. 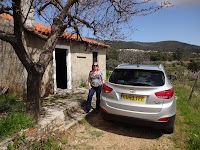 We arrived at the plot at about 1:00pm. Needless to say, apart from having to return the same way, with maybe the expecting of trying to find a route away from Paris, we will not be going this route again. We will stick with the Newhaven / Dieppe route, even with the four hour crossing and maybe a rough sea it is a far more relaxing journey.