Alongside the work, we were trying to track down Maria and Paulo to find out what was happing about meeting up with an architect. It took us several attempts and a while to contact them and I think they didn’t quite understand that we were in town so to speak. Once we had managed to clear this up, Paulo got organizing and arrangements were made for us to meet an architect in Remax’s office in Castelo Branco on the Wednesday.

This was ideal, as we also needed at some point to get to the Correios (Post Office), to settle the Motorway tolls, for the journey down last Friday. I had learnt from my visit in January that it took a couple of days to get into the system, so we kill two birds with one stone as they say.

On the Wednesday we headed into Castelo Branco. We visited the Correios to do the Motorway thing and then went to the Remax office. After a short wait we sat with Maria and Paulo and discussed the last few months and what would happen going forward, they were lovely still so helpful and willing to work with us on the project. Don’t under estimate the value of this sort of help it does make the whole process much easier.

Whilst we were waiting for the architect to arrive, Maria and Paulo where telling us that they were off to meet another English couple Jules and Andy who were looking for a property in the area and strangely they were staying in the same hotel as us.

A little later we were introduced to two guys, the first was names Pedro and was an architect and the second was called Marco who was a builder who worked very closely with Pedro. We sat around the table for an hour or so, outlining our thoughts. We think they understood, but wasn’t sure. At the end of the hour, we all decided that the best thing was for us all to meet up at the plot so Pedro and Marco could see for themselves.

As our cars were parked in different locations around Castelo Branco we agreed to make our own way, but would meet at the old washing well, just over the level crossing in Vale de Prazeres  which was the next village over to where the property was.

Teresa and I got slightly lost on the way back, but it didn’t delay us too long and after about a 40 minute journey we were at the meeting point. There was no Pedro or Marco, so we waited and we waited and we waited, after about 40 more minutes I decided to try calling them. Once again the mis trusting nature of us Brits came into play, had they decided this was not for them and just gone home? we asked ourselves.

Eventually I got them on the phone, it turned out they were at the opposite end of the village waiting for us, I guess thinking the same thing, were these Brits just time wasters. I think this was especially enhanced as for some strange reason I had told them the prefix for the UK was 001 not 0044, don’t know why, but of course when they tried calling me on the mobile phone I didn’t answer, but some strange American fellow, saying Ian & Teresa, no there’s nobody here by that name. 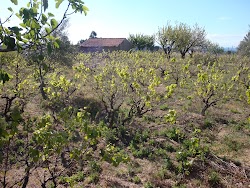 So another little episode over we made our way to the plot and showed them the plot and where we wanted to build the house.

Meeting over Pedro said he would go away and put together a package for us and would phone again in a couple of days for us to meet and further discuss moving forward.