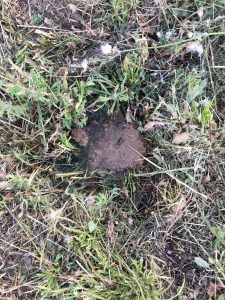 Walking around the farm, I came across a wet patch about 200mm in diameter, all around the area was very dry so obviously something was amiss. I was very quick to blame some workman that had been clearing the land for us back in February. I know roughly where all the water pipes run and I assumed they had damaged the pipes whilst turning the ground over. 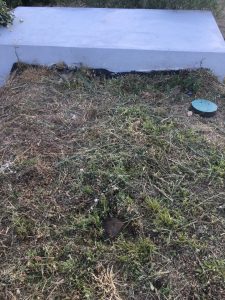 There are three groups of pipes around that area. One is the main feed to the house, a second is the feed/circulation for the swimming pool and the third is for the irrigation. I was concerned if I open up the ground would I have an uncontrollable gush and spurting water everywhere. At least at the moment the dirt was holding everything in place.

After a visit to a couple of local hardware stores and the purchase of a couple of variations of pipe joining connectors that I thought would help, it was time to dig down and find out what was going on. So, treating it like an archaeological dig, using a small garden trowel, I scraped away at the soil. 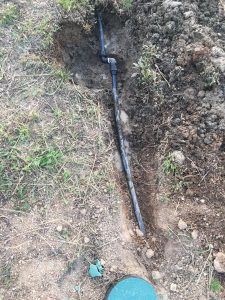 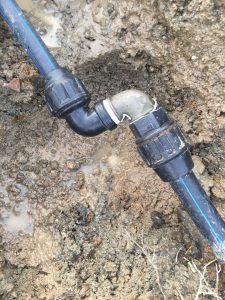 Eventually, I found the problem, it was, fortunately just a bad joint on the irrigation pipes.

I had seen this issue a couple of years earlier and had reported it to the engineer that fitted the irrigation system and had believed it had been fixed. Obviously, only a bodge job had been done and it had just been covered over.

It was a relief that it was not on the main water feed to the house and I could just turn the irrigation system off to make a repair. Of course, none of the connectors I had brought were of the right type, so a second visit to the shops was required. 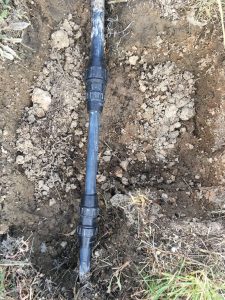 Once the correct fittings had been obtained it was a simple job to cut out the bad connection and made it good.

A quick test of the irrigation system proved nothing leaked and I just left it for 24 hours to double check before reburying the pipes.

I had also worked out how all the irrigation system was connected, both water pipe wise and control valve wise, so now have the knowledge to be able to extend the system in the future is required.

This entry was posted in 2018, House & Garden, Project Portugal, Uncategorized. Bookmark the permalink.