We were hoping that September would see the demolition of the old hut, but in true Portuguese style it didn’t happen. I am sure many of you that read this blog and therefore have an interest in the Portuguese life style would now that there are two dates with every job, the promised date and the actual date.  It is very rare indeed that these two are the same. The challenge is to try and get them as close together as possible. 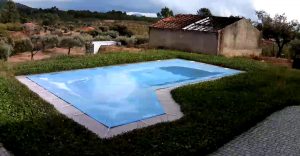 We had been pushing hard for the work to be carried out as quickly as possible, before the rains came, as we knew the landscaping work we had commissioned needed to be completed to ensure there was no, hopefully, further issue with the flow of water when the rains started.

Well last week the first real rainfall was seen in the area and we think that may have stirred some action with the builder as he had agreed that the work would be done before the rain came and any compensation claims from nearby neighbours etc. would be pointed in his direction. Maybe it wasn’t that, it was just circumstantial, either way, mid-week some heavy equipment appeared.

Over the next 3 days, first the roof disappeared, then the walls, by the Friday evening most if not all remnants of the “Old Hut” had gone. The next question is where has it gone.

We now as mentioned in an early blog the Portuguese put great stature on old weathered roof tiles, we know the intention was that they were being stacked somewhere on our plot for keeping, but where we wonder. 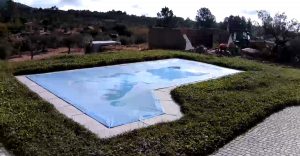 Also the old main roof timbers they were going to cut up into “log burner” size pieces and would be stacked somewhere on our plot so we can store and use during the colder months. Again we wonder where.

The thought on the remaining of the brickwork was that it would be used, some to build up a higher bank along the stream side to help prevent future overflows, and the remainder along the tracks down to the lower fruit farm. 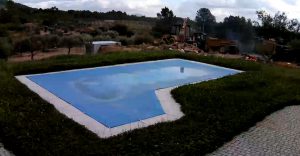 There was also agreement to use some of the old drain pipes removed from the earlier failed attempt at bridging the stream to form a drain to channel the rain water on one track direct into the stream.  Also to re camber the second track so the water flowed away onto the land above the stream, thus keeping it away from the fruit farm area. Any remaining brickwork from the hut to be spread over the tracks to try and firm up the dirt. Has this happened we wonder.

As you can tell, we haven’t yet been able to see if this has all happened to our satisfaction, however we will be back at the house this week to see for ourselves, so watch the blog for updates.

The one thing we do know if the old hut has finally gone and there should now be clear views right through towards Monsanto, weather permitting of course. 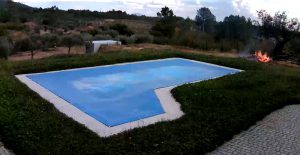