Swimming Pool – To heat or not to heat. 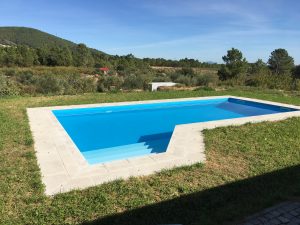 We had a swimming pool constructed a couple of years ago and at the time decided not to include heating as wanted to see how it would work without, after all we were in Portugal and it’s a lot warmer than the UK and everyone was telling us at the time that we would not need heating. We did however ask the builders to make sure that we could add heating at a later date if we decided to do so.

Research on the internet seems to guide that the optimum temperature for a pool is 28oc. We have been monitoring the temperature over the last two years and whilst it is warm enough, in the summer (June/July/August) maintaining a heat of around 25oc it is still only just warm enough and on the days, we saw 26oc we could see how those extra couple of degrees could make all the difference. Any time outside of that period it is was just too cold for us to enjoy, although we did try on a few occasions.

As we are intending to spend more time at the property and already want to extend the period that we can comfortably use the pool we thought we should start to find out more about adding some heating and at get some idea of what would be needed. We really want to be able to use the pool from end of March to the end of October as a minimum each year.

As with anything, nothing is ever simple, there seems to be a whole range of ways in which we can add heating and it is not just a heater that is needed. Heating the water is one thing but of course you want to try and keep that heat in the water, so need a “summer cover” which can be put over the pool at night.

The option we are being recommended is to fit a “bomba de calor” (heat pump), this has to be powerful enough to heat the water within a reasonable time, say roughly 2 days. It runs on electricity so running costs also need to be considered. I am lead to believe that the one we would need uses 4 kilowatts per hour when running so based on the rate we pay to EDP it is about €0,71 per hour (inc IVA), not too bad but of course it depends on how long it is running. If it takes 2 days (48 hours) then that is about €35 to get it up to temperature, but after that it would be a lot less to maintain the temperature. This explains the need to use a summer cover to retain as much of the heat as possible when not actually using the pool.

There also seems to be a wide variation of covers, and in turn a wide range in price, so need to investigate more why, there must be a valid reason for such a large variation. We also need to bear in mind that it seems that these covers may only last 3 -5 years so will need to be replaced, maybe that’s the reason for the variation of price.

Then it seems it is advisable to get a spool/spindle thing on wheels, a bit like a long cotton reel, to help with getting the cover off and on again.

We also took a poll on Facebook, Life in Portugal group, for people’s opinions and thoughts. It seems there are many that have invested in heating and all agree that it is quite expensive but there is a real payback when it comes to how long in the year the pool is usable. We are based north of most of the people we had feedback from and the further north you go the cooler it is, so it just confirms the needs.

That’s where we are, currently negotiating with the pool company to see what deal we can get, but we think we have reached the decision to go ahead.

This entry was posted in 2017, General, Project Portugal. Bookmark the permalink.