As mentioned in the last blog we had damaged the Main Gate in the summer and I can confirm that the repair has been done well on the side we damaged. However, whilst the repair on the other post was done well, there is still movement in the fixing on that side, which has been there since the original installation. We are going to have to get in touch with the gate installers to see what can be done, then we might be able to make a more permanent repair the post. It just needs the fixing bolts removed and replaced but tightened down properly. The gate does however work properly now, which is of course the main thing. 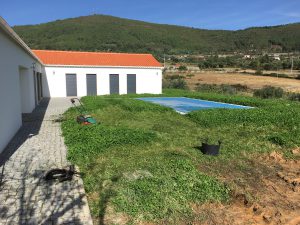 We had the most amazing clover grass, we really wanted it to be cut more often than it is but it has proved hard to get anyone to do it. The guys doing it now are the same people that demolished the old hut, I guess it’s because they were trying to do it all at the same time.

The net result was we have grass that was about a foot (304.8mm) tall with clover leaves about an inch (25.4mm). The good news is that it has now been cut and with the winter coming it shouldn’t grow as fast as in the summer, the not so good news was that it only got cut on the day we had to leave to come back to the UK. 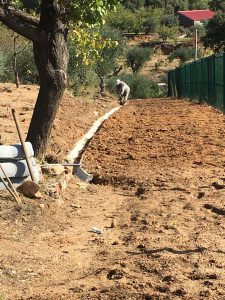 Not sure if this should be in the House & Garden section, the Old Hut or the Farm, but
let’s leave it here for now. The old hut is gone, so we had to get the land re-landscaped and also deal with water flows. We had a channel put in down what was the old track, this was being lined with a concrete gulley whilst we were there. This runs into a drain which takes any water under the track and shoots it into the stream (The old 500mm concrete tubes that we had to upgrade from the stream tunnel were used for this) All looks a bit messy as well at the moment, but I am sure when it is finished and the natural vegetation returns it will be fine!

On the down side the Cactus that we had been trying to keep on the bank dropped out the bank, where the team had to widen the track. On the up side this all happened whist we were there so we were able to retrieve it, and move it to a better place. Just hope it survives! It’s a Cactus, they survive anywhere, don’t they? 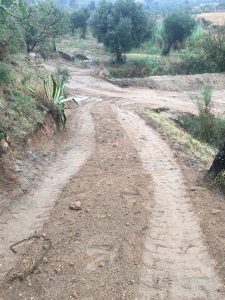 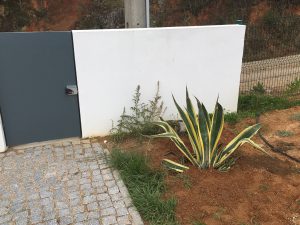 This entry was posted in 2016, House & Garden, Project Portugal. Bookmark the permalink.